Pressure is a fundamental quantity expressing energy per volume. The SI unit of pressure is generally pascal [Pa] = [J·m-3]. The term 'stress' (mechanical stress) is used as a synonym for pressure (SI). Pressure is known in physics as mechanical pressure, which is force per area, p = F·A-1 [Pa] = [N·m-2]. In physical chemistry, gas pressure is defined as p = n·V-1·RT, where the concentration is c = n·V-1 [mol·m-3], R is the gas constant, and T is the absolute temperature, and RT is expressed in units of chemical force [J·mol-1]. van't Hoff's osmotic pressure assumes the same form applied to dissolved substances diffusing across a semipermeable membrane, but concentrations should be replaced by activities. The activity of dissolved gases is expressed by the partial pressure, where the solubility can be seen as an activity coefficient. Pressure appears explicitely or implicitely in all chapters of physics and physical chemistry. In contrast to the universal counterparts energy and force, however, the general connections between various isomorphic expressions of pressure remain poorly understood: Pressure is the concentration of the force at the point of action. More generally, pressure is the force times concentration at the interphase of interaction.

In physical chemistry, gas pressure is defined by the fundamental Gas law, which can be expressed in different isomorphic formats, as: (1) p = C·kT (product of particle concentration [x·m-3] times kT [J·x-1]), and (2) p = c·RT (amount of substance concentration [mol·m-3] times RT [J·mol-1]). k and R are the Boltzmann constant and gas constant, respectively, and T is the absolute temperature.
In addition to mechanical and gas pressure (hydrostatic pressure, barometric pressure, gas pressure), isomorphic pressures are distinguished as osmotic pressure, diffusion pressure, reaction pressure, and electric pressure.
In ergodynamics, the pressure in a transformation, ΔtrΠX, is the product of free activity times force, ΔtrΠX = αX·ΔtrFX [mol·m-3 · J·mol-1 = J·m-3 = Pa] (Gnaiger 1989).
Force and pressure are frequently confused. Isomorphic forces are expressed as exergy change per advancement, where advancement is expressed in transformation-specific motive units MU and a variety of different formats [J∙MU-1]. Free activity has the unit concentration of the transformation-specific motive unit [MU∙m-3]. Therefore, pressure as the product of isomorphic force and free activity has the unique unit pascal, [Pa] = [J∙m-3] = [J∙MU-1]∙[MU∙m-3]. Isomorphic forces are expressed in different units, such as mechanical [N]=[J∙m-1], electric [V]=[J∙C-1], particle [J∙x-1] or chemical [J∙mol-1]. In contrast, isomorphic pressures are universally expressed in the common unit pascal [Pa]. In this formal sense, isomorphic pressure is more fundamental compared to the concept of isomorphic force. 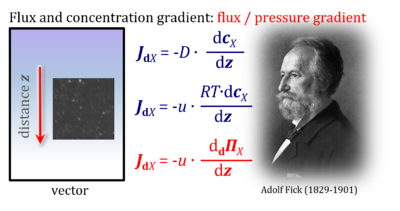 "For many decades the pressure-force confusion has blinded the most brilliant minds, reinforcing the expectation that Ohm’s linear flux-force law should apply to the hydrogen ion circuit and protonmotive force. .. Physicochemical principles explain the highly non-linear flux-force relation in the dependence of LEAK respiration on the pmF. The explanation is based on an extension of Fick’s law of diffusion and Einstein’s diffusion equation, representing protonmotive pressure ― isomorphic with mechanical pressure, hydrodynamic pressure, gas pressure, and osmotic pressure ― which collectively follow the generalized linear flux-pressure law."
Gnaiger E (2020) Mitochondrial pathways and respiratory control. An introduction to OXPHOS analysis. 5th ed. Bioenerg Commun 2020.2. https://doi.org/10.26124/bec:2020-0002
» pressure = force × free activity

In the classical physicochemical literature, there is confusion between the terms force and pressure:

Retrieved from "https://wiki.oroboros.at/index.php?title=Pressure&oldid=235484"
Categories:
This page was last edited on 23 January 2023, at 01:59.
This page has been accessed 13,111 times.
Privacy policy
About Bioblast
Disclaimers