Force is an intensive quantity. The product of force times advancement is the work (exergy) expended in a process or transformation.

Abstract: Gibbs energy, G [J], is an extensive quantity, defined relative to a reference state of a system, comparable to altitude [m] defined relative to a reference (altitude at sea level). When a chemical reaction proceeds in a closed isothermal system at constant pressure, the Gibbs energy of the system undergoes a change, dG [J], when no other net transformations occur simultaneously and no work is exchanged across the system boundaries, or drG [J] when the emphasis is on the partial change of Gibbs energy due to the reaction r, irrespective of other energy transformations. In contrast to the extensive quantity of energy, force is an intensive quantity. An isomorphic force is defined as the partial derivative of Gibbs energy (exergy) per advancement of a transformation, ΔtrFX = ∂G/∂trξX. The driving force of a reaction (compare affinity), therefore, is ΔrFX = ∂G/∂rξX [J·mol-1], which may be called the Gibbs force of reaction (Gnaiger 1993).

In classical thermodynamics the notion of a driving "force of chemical reactions" does not exist. Forces of chemical reactions, therefore, belong to the topic of nonequilibrium thermodynamics or ergodynamics. The "reaction Gibbs energy" is defined by IUPAC as the negative value of the "affinity of reaction", A = -ΣB νBμB (Cohen 2008 IUPAC Green Book). Since Gibbs energy is an extensive quantity expressed in the SI unit joule [J], the term "reaction Gibbs energy" suggests an extensive quantity. In fact, however, "reaction Gibbs energy" is defined as an intensive quantity expressed in the SI unit joules per mole [J·mol-1]. This nomenclature is inherently confusing (particularly when combined with #Thermodynamic ignorance), and is deeply rooted in a convention frequently applied in physical chemistry: "Unfortunately, using different symbols for extensive thermodynamic properties and their molar counterparts greatly increases the number of symbols and equations. .. Therefore, we will use a single set of symbols for thermodynamic quantities and let them represent the intensive, or molar, quantities" (Alberty 1980 Physical chemistry, p. 4).
"It is common practice to use a single set of symbols for the extensive (Table Al) and the corresponding molar quantities. In this manner, the number of symbols is reduced. In view of the fundamental distinction between size-specific molar quantities and process-intensive molar quantities, such a simplification is acceptable only when restricted to the specific quantities. Based on the same argument and selecting a different measure of system size (mass or volume instead of amount of substance), it may be practical to use the symbols of the extensive quantities for their specific (mass- specific or volume-specific) counterparts (ref. 5). When it is necessary to discern the extensive and corresponding specific quantities explicitly, application of more complex symbols cannot be avoided (Table A2). In any case, the process-intensive quantities should be clearly distinguished from the extensive and specific properties" (Gnaiger 1993 Pure Appl Chem, p 1993).
The adjective molar before the name of an extensive quantity generally means divided by amount of substance, n [mol]. Appart from the fact that molar has sometimes a different meaning, namely divided by amount of substance concentration, c [mol·L-1], normalization by amount of substance can lead to quantities with fundamentally different meaning (Gnaiger 1993 Pure Appl Chem):

The Gibbs force of reaction, ΔrFX (or molar Gibbs energy change of reaction of thermodynamics, ΔrGX) can be expressed in different formats and corresponding units. Most generally, ΔrFX is expressed in the molar (chemical) format as exergy per amount of reacting substance with units [J·mol-1]. It can be converted to other formats, which then are distinguished as

ΔrFX can be defined in different and fully consistent ways (see Supplement for derivations):

Force and pressure are frequently confused. Isomorphic forces are expressed as exergy change per advancement, where the advancement is expressed in transformation-specific motive units, MU, and a variety of different formats [J∙MU-1]. In contrast, isomorphic pressures are universally expressed in the common unit of pressure, pascal [Pa]. In this formal sense, isomorphic pressure is a more fundamental concept compared to the concept of isomorphic force.
» Pressure: the pressure-force confusion
» Linear phenomenological laws 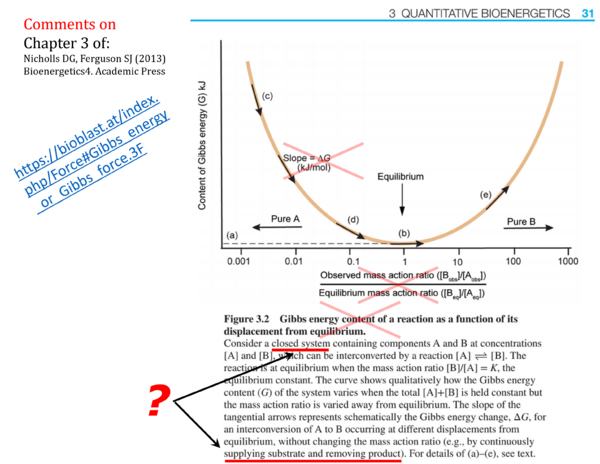 Retrieved from "https://wiki.oroboros.at/index.php?title=Force&oldid=233245"
Categories:
This page was last edited on 20 October 2022, at 22:44.
This page has been accessed 26,180 times.
Privacy policy
About Bioblast
Disclaimers