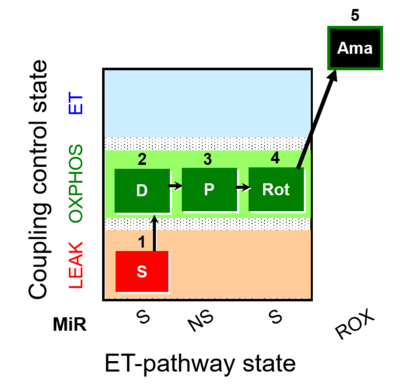 SUIT-009 is a short protocol for simultaneous determination of O2 flux and the rate of H2O2 production (H2O2 flux) in mitochondrial preparations such as isolated mitochondria, tissue homogenate (except of liver) and permeabilized cells (already permeabilized when they are added to the chamber). Succinate (S) supports the reverse electron transfer (RET)-related H2O2 production in the LEAK state. Pyruvate (P) supports NADH-pathway (N), and usually in the presence of ADP it does not increase further the H2O2 flux. Antimycin A (Ama) inhibits Complex III (CIII) at the Qo level and could increase the H2O2 flux. The sensitivity of the Amplex UltraRed® assay (for determining H2O2 production) changes over the experimental time and upon addition of chemicals. To correct H2O2 flux for the sensitivity changes several H2O2 calibration steps are done during the experiment. Since the H2O2 flux measured in MiR05-Kit showed a linear correlation with the oxygen concentration, it is recommended to change the oxygen level during the experiment.

+ This protocol is designed to evaluate RET in the S-linked pathway in the LEAK state, which is decreased by ADP due to reduction of the mt-membrane potential.
+ Short protocol.

- CIV activity and cytochrome c test cannot be performed together with the AmR fluorescence assay.
- We do not generally recommend the addition of already permeabilized cells into the chamber. Instead, we recommend performing the permeabilization of the plasma membrane in the chambers with titration of digitonin.