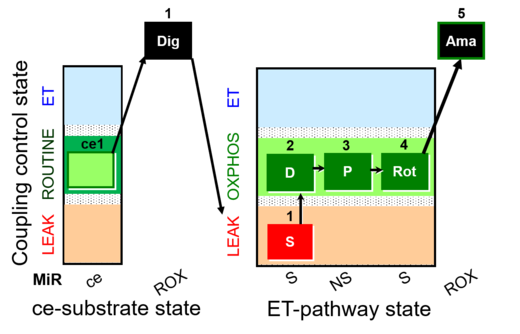 SUIT-009 is a short protocol for simultaneous determination of O2 and H2O2 flux in permeabilized cells. Living cells are added first to the O2k chamber and then permeabilized as a part of the protocol. Succinate (S) supports reverse electron flow from CII to CI (RET) with high H2O2 production in the LEAK state at low O2 flow, SL. Respiration is stimulated by ADP (OXPHOS capacity, SP), while H2O2 flux declines dramatically. Pyruvate (P) supports the NADH-pathway and thus the convergent NS-pathway with little further effect on H2O2 flux, NSP). Malate is not required, since oxaloacetate is formed from succinate-fumarate-malate. Antimycin A (Ama) inhibits Complex III (CIII) at the Qo level inhibiting respiration to the level of Rox, and generally increases the H2O2 flux. The sensitivity of the Amplex UltraRed® (AmR) changes over experimental time and upon addition of chemicals. To correct H2O2 flux for the sensitivity changes, several H2O2 calibration steps are done during the experiment. The experimental control for O2 flux in the absence AmR is carried out with SUIT-009 O2 ce-pce D016. According to our results, the H2O2 production is linearly dependent on the O2 concentration in MiR05-Kit, therefore, during the measurements the O2 concentration has to be well-defined. In this protocol, we suggest not to go under ~100 µM O2. SUIT-018 AmR mt D041 has been designed to study O2 dependence of H2O2 flux in mitochondrial preparations.

+ This protocol is designed to evaluate RET in the S-linked pathway in the LEAK state, which is decreased by ADP due to reduction of the protonmotive force, pmF.
+ Short duration of the experiment.

- CIV activity and cytochrome c test cannot be performed together with the fluorescence assay.
- The H2O2 flux will be much lower compared to that observed with isolated mitochondria, which might be explained by the high antioxidant capacity of cytosolic compounds.
- In the case of HEK293T cells, however, due to the high malate-linked anaplerotic capacity, malate is converted not only to oxaloacetate but also to pyruvate, such that addition of succinate alone supports NS-pathway capacity (no effect of pyruvate on OXPHOS capacity. Under these conditions, reverse electron transfer is inhibited in the LEAK state, which prevents excessively high H2O2 flow.