The protonmotive force ∆mFH+ is known as Δp in Peter Mitchell’s chemiosmotic theory [1], which establishes the link between electric and chemical components of energy transformation and coupling in oxidative phosphorylation. The unifying concept of the pmF ranks among the most fundamental theories in biology. As such, it provides the framework for developing a consistent theory and nomenclature for mitochondrial physiology and bioenergetics. The protonmotive force is not a vector force as defined in physics. This conflict is resolved by the generalized formulation of isomorphic, compartmental forces, ∆trF, in energy (exergy) transformations [2]. Protonmotive means that there is a potential for the movement of protons, and force is a measure of the potential for motion.

The pmF is generated in oxidative phosphorylation by oxidation of reduced fuel substrates and reduction of O2 to H2O, driving the coupled proton translocation from the mt-matrix space across the mitochondrial inner membrane (mtIM) through the proton pumps of the electron transfer pathway (ETS), which are known as respiratory Complexes CI, CIII and CIV. ∆mFH+ consists of two partial isomorphic forces: (1) The chemical part, ∆dFH+, relates to the diffusion (d) of uncharged particles and contains the chemical potential difference§ in H+, ∆µH+, which is proportional to the pH difference, ∆pH. (2) The electric part, ∆elFp+ (corresponding numerically to ∆Ψ)§, is the electric potential difference§, which is not specific for H+ and can, therefore, be measured by the distribution of any permeable cation equilibrating between the negative (matrix) and positive (external) compartment. Motion is relative and not absolute (Principle of Galilean Relativity); likewise there is no absolute potential, but isomorphic forces are stoichiometric potential differences§.

The total motive force (motive = electric + chemical) is distinguished from the partial components by subscript ‘m’, ∆mFH+. Reading this symbol by starting with the proton, it can be seen as pmF, or the subscript m (motive) can be remembered by the name of Mitchell,

With classical symbols, this equation contains the Faraday constant, F, multiplied implicitly by the charge number of the proton (zH+ = 1), and has the form [1]

A partial electric force of 0.2 V in the electrical format, ∆elFeH+a, is 19 kJ∙mol-1 H+a in the molar format, ∆elFnp+a. For 1 unit of ∆pH, the partial chemical force changes by -5.9 kJ∙mol-1 in the molar format, ∆dFnH+a, and by 0.06 V in the electrical format, ∆dFeH+a. Considering a driving force of -470 kJ∙mol-1 O2 for oxidation, the thermodynamic limit of the H+a/O2 ratio is reached at a value of 470/19 = 24, compared to the mechanistic stoichiometry of 20 for the N-pathway with three coupling sites. 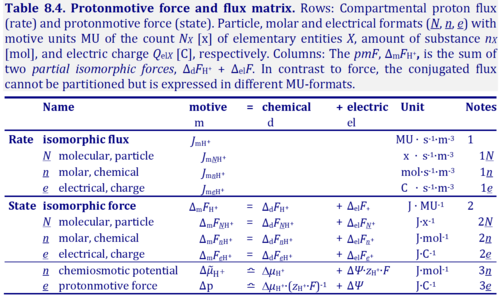 2: ∆mFH+ is the protonmotive force per entity H+ (not per e-) expressed in any MU-format. ∆elFp+ is the partial protonmotive force (el) acting generally on positively charged motive elements (protons p+; i.e. ions that are permeable across the mtIM). In contrast, ∆dFH+ is the partial protonmotive force specific for hydrogen ion diffusion (d) irrespective of charge. The sign of the force is negative for exergonic transformations in which exergy is lost or dissipated, ∆mFH+b, and positive for endergonic transformations which conserve exergy in a coupled exergonic process, ∆mFH+a = -∆mFH+b. By definition, the product of flux and force is volume-specific power [J∙s­-1∙m-3 = W∙m­-3]: PV,mH+ = JmeH+a∙∆mFeH+a = JmnH+a∙∆mFnH+a.

Retrieved from "https://wiki.oroboros.at/index.php?title=Protonmotive_force&oldid=230031"
Categories:
This page was last edited on 10 July 2022, at 20:50.
This page has been accessed 15,467 times.
Privacy policy
About Bioblast
Disclaimers