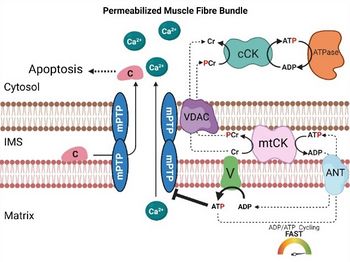 In isolated mitochondria, calcium-induced mitochondrial permeability transition pore (mPTP) opening is thought to be regulated by adenylates but the relative effects of adenylate cycling in permeabilized tissues is less explored. To determine the effect of adenylates on calcium retention capacity (CRC) as an index of mPTP in permeabilized muscle fibres, separate in vitro assessments of CRC were compared in media that did not contain ADP or received exogenous ADP that naturally equilibrated with ATP through endogenous ATP-dependent pathways (presence of both ADP and ATP). Comparisons were made to a hexokinase 2-deoxyglucose system that recycles ATP to ADP (depletion of ATP). In permeabilized mouse quadriceps fibres, we found that CRC was increased by ADP suggesting endogenous ADP-ATP equilibria attenuate mPTP. Supplementing ADP with the hexokinase ATP recycling clamp lowered CRC relative to ADP alone but had no effect relative to the absence of adenylates. This finding suggests ADP does not alter calcium-induced mPTP and that its regulation by adenylates is specific to ATP in permeabilized mouse quadriceps fibres. Accelerating matrix ADP/ATP cycling with creatine had no effect on CRC when combined with 5mM ADP but more than doubled CRC (desensitized mPTP) when the hexokinase clamp was included. These results demonstrate the importance of considering adenylate equilibria during the design of in vitro assessments of calcium-induced mPTP in permeabilized muscle fibres.

Retrieved from "https://wiki.oroboros.at/index.php?title=Bellissimo_MitoFit_2022&oldid=235091"
Category:
This page was last edited on 8 January 2023, at 06:49.
This page has been accessed 835 times.
Privacy policy
About Bioblast
Disclaimers